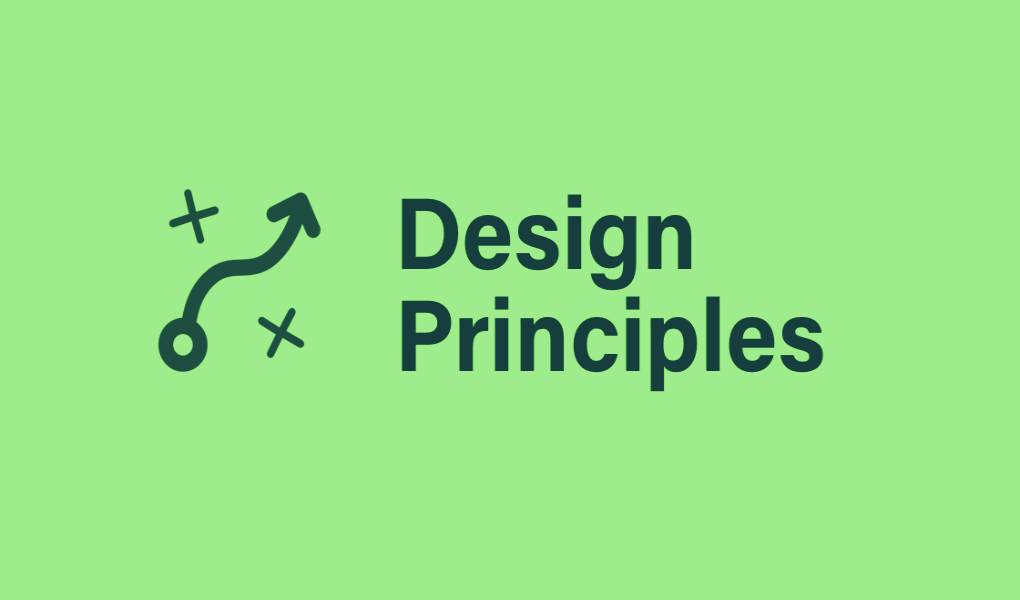 Design principles to innovate? I recognize that the title is not very sexy, but its relevance for these years of pure uncertainty that we live in, I tell you, will be the most. The need to manage design principles is accentuated in creative processes where we want to develop a powerful message, a new service, readapt a product, propose a strategic vision, bet on a real impact purpose, or include a culture of innovation in the organization.

These design principles are adjusted to the objectives and need to be solved and are assumed throughout the process as a mirror-controller in which to look to see if the minimum requirements are being met in the planned development. Know if the project’s original purpose is being served before its final use. The principles are a kind of framework.

Innovate is what you have. Either you build a framework beyond the classic benefit frameworks, or the project can end up being a kind of Frankenstein without direction, without the ability to pivot, only meeting the minimum expectations: both in experience and impact on the business.

And to show a button: I want to innovate with a luxury real estate platform… well, obviously, it will have to be assumed that said space is designed from principles such as trust, security, the service relationship… Principles applied during development will be claimed from the questioning in decision-making. Does the platform meet the minimum transactional security? How does our client feel treated? Is trust generated for a sale of this dimension? And many more etc.

The Design Principles For Our Beloved

We must see them as a necessity, a lever, a turbo, an intergalactic security shield that allows us to adopt, achieve and improve our lives and their impact on our closest environment without forgetting the most distant. The 21st century is leaving our mouths open and has pushed us to live a reality in the process of hybridization that encompasses everything. From rich to disadvantaged, this century needs an adjustment context. It assumes general design principles that help break with the dystopian and selfish tendency that devastates us and imposes itself on decisions of vital importance.

In this 21st century, a new culture is being created that radiates most of the essential things in our lives, from politics and economics to lifestyle and different sensitivities and relationships. Culture is driven by the digital that affects everything, including our health and the progressive dehumanization of the conscious individual. As you can see, everything looks pretty dystopian… but with the correct principles, it shouldn’t be!

I don’t know if historians will name the 21st century as THE CENTURY OF CHANGE. Perhaps as the century of the new. Or that of the maximum self-inflicted anxiety due to uncertainty. What does seem confident is that we are experiencing this scenario for the first time in history. And we have to generate a minimum scenario to apply our principles!

Three Signs To Identify The Time We Had To Live.

The scenario could be defined in its minimum through three signals or keys offered by this new experience called the 21st century.

First: We live in a globally connected world. Nothing we don’t already know. However, we are connected not only digitally but also industrially (companies opt for relocation in exchange for logistic dependencies), energetically (or the emergence of the new global geopolitics), economically (with markets in real-time), socially (with media that replicate the same headlines and policies) and culturally (with phenomena like Netflix or TikTok).

Yes. We live in a hybrid and “entangled” world. Therefore, the impacts of innovation can be global and spread in an accelerated time. For example, the challenge of understanding an intermediate scale becomes essential.

As we can see, we need indicators that make possible a good impact adapted to people and their objective circumstances, to cultures and habits and distances, and… much much much much more to be determined.

Second: technologies are ingenious. New technologies are creating a new culture that radiates to most things in our lives, from politics and economics to lifestyle and different sensitivities. A digital-driven culture affects everything, including our health and the progressive dehumanization of the individual.

We live under the protection of an extreme technological determinism: we have techno-solutions, techno-utopians, “collapses,” “denialists,” accelerated or disconnected nihilists… and everything in the middle of the communication age. Human-centric, to that user-centric, and now that business and innovation are the epicenters, their thing is that a techno-centric vision is prevailing.

Also, There is already an intelligent tool living with us. Something that looks, talks, and listens… but he also learns, thinks, and… makes decisions! It is innovative technology. The one that offers the possibility that people can be augmented as human beings… Or perhaps be replaced for many of their tasks… even the most human and creative jobs.

Third: People and their new mentality. Assuming globalization, the existence of intelligent machines, and having lived through the great global crisis that has accompanied us since 2008, have made us create and adopt a new mentality that is already impacting and transforming the world and business as we know them.

We receive an average of more than two thousand messages daily, including ads, WhatsApp, social media, TV, radio, street… More than our grandparents received during their entire lives. It is a fact that impacts as direct as this are pushing evolution in our way of furnishing the head and, by default, a biological change. We are losing human abilities such as attention, memory, curiosity, or the ability to adapt. We are obliged to be able to assume uncertainty… live in real-time… have a mind always in beta mode… position ourselves in the face of the climatic countdown… to be sustainable as human beings. And on top of that, we are faced with so much information and data that we become distrustful.

Three Principles To Design The World We Are Living In

After evidencing the reality of this century of change, it is clear that we need new design principles to innovate, create and grow accordingly. To face this new hybrid reality with strategic keys to help in the decision. And in this 21st century, the design principles chosen to be the mantra on which we lean to innovate are…………. And the winners are… and the principal goes to…

1-Collaboration. We have to be united before the stage we share. At least in some points that impact all of us… When we talk about collaboration by default, we think of the CO_ culture: that of sharing, collaborating, or co-creating, and that is good because it helps to manage the problem of scale and impact business and relationships.

But collaborating also means assuming demands such as diversity and opportunities such as inclusion. It is about supporting the common good regardless of our needs. Collaborating means understanding that we have an impact that affects people and our environment. Collaborating is the natural human way to grow and be sustainable. Collaborating is caring and being cared for.

2.- Transparency. Be careful that transparency is not at odds with privacy. One of the few self-defense weapons is our privacy. Taking care of our privacy is a treasure in the age of increasingly gigantic and controversially valuable databases. It has priceless value.

The lack of privacy is not transparent. Transparency means the search for a new trust and a key point of support to make collaboration possible. It also seems to be the best way to ward off suspicions, tricky truths, and contextless stat validations, for example.

Transparency is instead being honest and sincere and thus not avoiding conflict due to the need always to win… they are not CSR policies, nor access to a politician’s spending figures, nor knowing precisely the benefits of the organization. .. which should be natural default data. All this information is accurate, sharing it without prejudice and eliminating the possibility of corrupting it.

3.- Redefinition. I prefer to assume the beginning as a predicate, in its infinitive form, as something in the process. More than a redefinition, it would be redefined as a synonym of “going into action without fear.” I believe that we need to redefine… All this new time of change needs a TOTAL CHANGE in itself. In its paradigms and pillars. We need an adoption exercise for a new type of humans, their societies, and a planet on edge.

To achieve this, we must redefine our relationship with many transcendent elements: Time, Presence, and Trust… but also deeply rethink the ego, the common good, or the meaning of what we understand as sustainability.

To redefine is to create new priorities and thus start planning to survive and achieve a better world for everyone in Australia or Europe, but also in a town in central Africa or a suburb of a Brazilian megacity.

All this and that must be redefined without fear. I am assuming that we still have to change our way of thinking. Or exchange values ​​or assume categorical imperatives of others and others… because in the very exercise of redefining, we already assume the need to pay attention to critical thinking, to listen, to be honest, and, of course, to come across other radically different ideas.

In short… This twenty-first century gives so much to talk about. It is possible that we can overcome it and survive it (even as a species) as long as we stand firm and decide to attend to the current global framework and innovate under the prism of certain principles. General and consistent. To better design the world and the experience that we are living.